The week of June 15-19 presented many critical developments on the geopolitical and economic front for financial markets. The benchmark S&P 500 index was up 1.9% for the week finishing at 3,097.74 leaving eight of the eleven S&P SPDR sectors in positive territory.

We alerted our readers last week of a possible meeting scheduled for June 17 between US and Chinese officials in Hawaii and promised a follow-up analysis. Rumors of the meeting reported by the POLITICO were true, and the outcome of the secret seven-hour meeting between US Secretary of State Mike Pompeo and China’s top diplomat Yang Jiechi remain somewhat unclear.

Here’s What We Know

The meeting was viewed as “constructive” despite both sides reinforcing their rooted positions on key issues facing an already strained relationship.

Focusing on the positive: both sides discussed the need for full transparency and information sharing on the coronavirus pandemic, and the Chinese delegation recommitted to implementing and accelerating its purchases under the Phase 1 Trade Deal. China pledged earlier this year to purchase over $36.5 billion in American agriculture products ranging from soybeans to corn and ethanol. Purchases in the early part of 2020 were significantly under that amount as US government data showed Beijing spent $4.65 billion, roughly 13% of the trade deal goal.

China doubled down on Hong Kong by passing a draft national security bill one day after the Hawaii meeting. Pompeo said during a European virtual conference on June 19 that the future treatment of Hong Kong really depends on what China does next. He added the US is not forcing international partners to choose between the US and China, but rather to make a choice between “freedom and tyranny.”

The US has threatened in the past to revoke special privileges for Hong Kong if Beijing formally passes a measure. The G7 also issued a joint statement on June 17 voicing concerns about the bill. It is likely China’s Legislature will pass the security law by July 1 during its next session in Beijing.

Second point of contention: Yang objected to US President Donald Trump signing the Uighur Human Rights Act into law. Trump signed the law sanctioning Chinese officials responsible for mass incarcerations of Uighurs and Muslim minorities in China on June 17. China’s foreign ministry echoed Yang’s objections saying the act “rudely” interferes with the country’s internal affairs and that China will respond leaving the US to face the consequences of its actions.

Finally, Taiwan. Yang told Pompeo that the “one China” policy makes Taiwan an “inalienable” part of China and is a fundamental basis for US-China relations. As I mentioned in my previous analysis, Taiwan’s President Tsai Ing-wen continues to raise eyebrows in Beijing. Her government is intent on purchasing more military equipment from the US and will establish an office on July 1 to aid Hong Kong citizens fleeing the city because of the security law. China reacted by vehemently denouncing the establishment of the office and has violated Taiwan’s airspace with military aircraft over five times in the past two weeks. 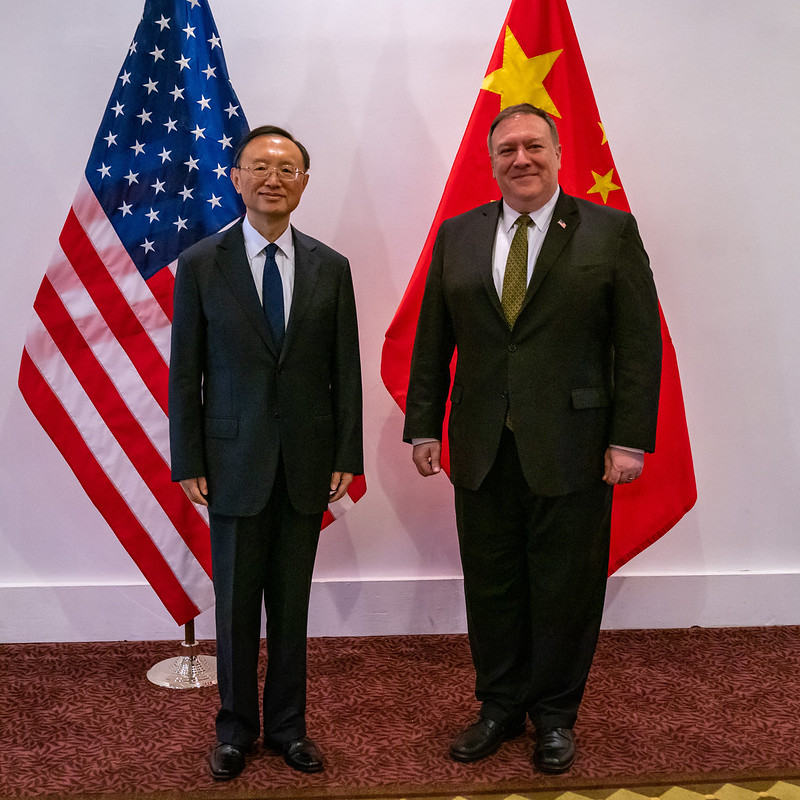 Politburo and Top China Diplomat Yang Jiechi with US Secretary of State Mike Pompeo in Hawaii on June 16, 2020. Source: US Department of State via flickr.

Our Assessment of the Hawaii Meeting

The result of even having a meeting between US and Chinese officials at such a high-level is undoubtedly positive for markets and American-Sino relations. Many analysts were speculating, with good reason, that diplomatic channels between Washington and Beijing had effectively dried up as a result of Chinese officials pursuing Wolf Warrior diplomacy while President Trump escalated rhetoric over the coronavirus.

The POLITICO reported that China called for the meeting amid rising tensions over the past few weeks. We believe this is highly likely and we are now asking ourselves: Is China signaling it cannot sustain long-term tensions with the US?

This is the case in our view or at the very least, it signals Beijing will use direct diplomacy with Washington to alleviate pressure build-ups in the relationship. Many analysts believe the meeting in Hawaii may have brought the US and China away from the brink of a broader conflict, but we cannot make the mistake of overplaying this sentiment.

Both nations over the course of the week have acted and counteracted quite emphatically to evade any perceived notions of weakness. China is intent on getting its way on domestic issues while the US remains poised to counter any threat and to ensure China meets its trade commitments.

Moreover, China’s economic uncertainty is still a major concern for the politburo in Beijing as no GDP target was set during May’s National People’s Congress. According to a top Chinese government think tank, the Chinese economy is expected to grow by 3% in 2020. We must keep in mind the Chinese economy unprecedentedly shrank by 6.8% in the first quarter, and expectations for the manufacturing sector are forecasting a tough road ahead in the second half of the year.

As it relates to trade relations, investors should confidently walk away from this meeting knowing that the Phase 1 Trade Deal is still a priority for China. This is also shared by policy makers in Washington. As the meeting in Honolulu was underway, US Trade Representative Robert Lighthizer testified before the House Ways and Means Committee and said that China is giving “every indication” it will live up to its commitments, although there are more purchases to go.

China’s provocative actions towards Taiwan and military engagements along the Indian border are concerning on the security front. Both India and China are resolute on ending the conflict, but flareups should be monitored and call into question China’s broader military objectives.

I said in my previous analysis that like the Peloponnesian War of Ancient Greece which took on many phases, the next phase of the US-China “cold-war” is dependent on what China will do next. The next phase may already be underway.

Market Overview for the Week of June 15

It was a critical week for markets as investors considered data releases and the nation emerging from lockdowns while weighing fears of a resurgence in coronavirus cases.

The headline of Retail Sales rising by 17.7% in May sent stocks higher as the number doubled Wall Street’s expectations. Housing data remained positive while manufacturing data from the Empire State and Philadelphia Fed indices surprised to the upside.

Markets also watched the Federal Reserve intently as Chairman Jerome Powell testified before Congress announcing the central bank will shift from purchasing ETFs to corporate bonds in an effort to provide more liquidity. Fed officials later in the week exercised caution on the economic recovery drawing on COVID-19 concerns adding it can purchase an unlimited number of Treasuries and mortgage-back securities.

Concerns over increasing COVID-19 cases remains on the minds of investors. Major indices reversed to the downside during Friday’s action after Apple reported it will once again temporarily close stores in certain parts of the country over fears of mounting virus cases.

To conclude, we continue to focus on our data driven approach when navigating markets in both stable and volatile times. There were many positive signs last week alluding to a recovery in the US economy and we remain positive for the duration of the year.

Important Events for the Week of June 22:

If you enjoyed this article and have any questions, please contact us directly at 949.472.4579. Please feel free to forward this article to anyone who might be interested.

Robert R. Fragnito is the Chief Operating Officer and a Financial Advisor at MCF Capital Management, LLC. He earned his bachelor’s degree from The George Washington University in Washington, DC. He majored in International Affairs with a functional concentration in Conflict and Security and a regional concentration in the Middle East. Robert interned for several foreign policy organizations in Washington, DC and continues to write and publish on geopolitical topics.

SEND US A MESSAGE

Let us know how we can help you.

By submitting this form you will be added to our mailing list. Our subscribers get access to MCF's market commentaries, analysis, and events. If you don't want to subscribe please indicate in the message field below or unsubscribe when you receive our newsletters.

The opinions expressed here reflect the judgement of the author(s) as of this date and are subject to change without notice. Information presented here is for informational purposes only and does not intend to make an offer, solicitation, or recommendation for the sale or purchase of any product, security, or investment strategy. Investments involve risk and unless otherwise stated, are not guaranteed. Be sure to first consult with a qualified financial adviser and/or tax professional before implementing any strategy discussed here. The information being provided is strictly as a courtesy.

US Secretary of State Mike Pompeo hosts a Working Dinner with Yang Jiechi's Chinese Delegation in Honolulu on June 16, 2020. Source: US Department of State via flickr.